Fast treatment of data from server

In an app I’m working on, I’ve noticed that if I parse a large JSON blob, e.g. 19MB that parsing into PureScript is slow. The data is basically a table of data of about 10k rows.

It takes 100ms for the browser to parse this JSON blob into a JS object, which is fine. A JavaScript app would be ready to work with this data promptly.

It takes about 5s for foreign-generic to consume that into a PureScript value. Too slow.

Now, I intend to make my data schema leaner to substantially reduce the redundancy in the JSON output. I also will be paginating data from the server, so I won’t necessarily be sending more than N thousand rows at a time. However, the baseline performance is very important too.

However, there are additional considerations, such as:

which would simply access the objects as necessary rather than constructing PureScript objects for them.

Sort of like Argonaut, but well-typed. You are able to walk the spine without filling in the contents.

I’ve taken this approach in Haskell with ViewPatterns on a binary format.

Is there any work in the PureScript ecosystem to generate something like this? Essentially, we want to retain the original format sent over the wire and walk it in a type-safe way.

That would let you choose between a shallow spine-only walk, and when convenient, materialise a view into a proper PureScript object.

A codegen tool (template-haskell, in my case) could consume the normal types and produce the “view” code.

I considered a binary format like flatpack/protobuf/cbor/etc. but I think JSON.parse is plenty efficient, it’s rather the materialization into PS objects that is slow as far as I can tell.

I’ve been avoiding writing my own “bridge” between Haskell and PureScript, but

At Awake, we have an internal codec library that uses unsafe exceptions instead of binding through Either. The monadic overhead is just way too high. I’ve found this makes performance acceptable for all of our use cases so far. I’ve measured it decoding a 7MB JSON string to PS objects in about 60ms.

Good tip to be aware of, thanks.

Is that decoding from a JS object (I.e. leaning on JSON.parse) or parsing the string directly?

It uses JSON.parse under the hood, so it’s materializing the whole response.

I’m not sure if this is entirely relevant, but we have a similar-ish scenario where we’re receiving large amounts of JSON via a websocket.

My solution was to make the handling of it somewhat lazy - there’s a series of buffers ending in a coroutine that is used to populate a scrolling view.

It’s a little convoluted because we don’t have a 1:1 socket message:UI entry, if that were the case we could probably skip the separate looping process and Event and deal with things more directly in the coroutine… but anyway, maybe there’s something of use in here?

Right, there are a few attacks here:

I’ve already done a test of (4) with 5k rows of a table of e.g. 12 fields. I did this test on Jan 15th. It’s a dump of daily covid deaths (sorry for the macabre dataset). Anyway, the NEXT button simply changes an Int in the Halogen renderer to say which part of the array to render. I’m able to press and hold down that button and it scrolls through them all smoothly. What google spreadsheets does is have a DOM element whose inner height matches what you expect, and then they pick up scroll events. When you scroll that dom element, and scroll bubbles up, it does the equivalent of mashing the NEXT button. It’s a very clever trick (a friend who worked on another spreadsheet library told me the trick). Even Halogen whose performance isn’t anything special is capable of doing it. So that’ll be my approach for tables.

As it happens, my data is nested like JSON. So it could be a table of a tree of a table, so pagination (3) won’t always save me. That’s why I want to make (1) perform well.

I’ve already started an implementation of the View approach. I’ll update the thread when I’ve got it working with an experience report. But that might be a while away.

In case I get randomized to another task, here’s my WIP module: Frisson · GitHub

Yeah, the catching-the-scroll trick is pretty much what we do too

although not quite as smoothly as in google sheets, as we can also be held up on processing data before it’s ready to display.

In our case the socket connection isn’t just because we’re trying to prevent blowing up the client, it’s that the backend is scanning an external dataset and producing information about the schema of the dataset incrementally - that process is also not fast enough to return a single response to us, given that in theory it would need to see the entire dataset to fully determine the schema, and there’s no explicit limit set on how large the external dataset might be.

We have similar problems in a way, only you’re showing the actual data where we’re compressing that somewhat by working with its structure and a sampling of scalar values within it.

I see, that’s another good point. In my case the data is available and just ready to be dumped (for now, later I will do streaming). In your case the server is processing it slowly so you’re showing whatever arrives to the client immediately. In that case I understand why you have the websocket!

The latest version of Frisson is now working for sending data from the server to the client (Haskell to PureScript).

I have some other infrastructure which basically uses an affjax REST call to produce a Json (argonaut’s) and then calls unsafeView json which produces View a for the given output type. The RPC call infra I have ensures that the type returned is statically matching the RPC method.

So decoding the 14.6MB of JS with JSON.parse takes 100ms and then I can immediately access the data in a “lazy” way. Properties use accessors, and sum types are accessed similar to argonaut.

This supports server->client, I don’t currently need client->server as argonaut works well for that (the client doesn’t send much data to the server).

But I might implement that later. It could be done by deriving dematerialization functions: dematerializeFoo :: Foo -> View Foo, and completely avoid argonaut.

Once could also implement generation of materialization functions, materializeFoo :: View Foo -> Foo, for when performance doesn’t matter as much as convenience.

I’ve ported my Halogen components to use the View X instead of X types and here are my latest stats: 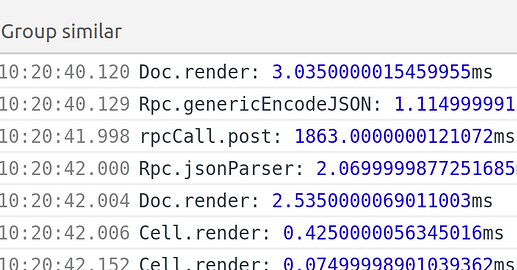 The server takes 1863ms to generate the data (that’s much easier to optimise as it’s just Haskell).

Here JSON.parse takes 2ms and my Halogen component takes <1ms for each cell in the doc.

The server takes 3800ms to generate the data.

Here JSON.parse takes 155ms and my Halogen component takes <1ms to render the cell (a table).

As there is no parse step after JSON.parse the data is ready immediately for use in PS.

This solves my client-side problem.