I’m excited and proud to announce the release of PureScript 0.15!

If you are new to PureScript, you can follow the getting started guide to give it a try.

PureScript 0.15.0's main feature is the support for ES modules. But that’s really a summary for the following changes:

Type-level programming fans will also enjoy the support for type-level integers. Be creative and let us know how to further build upon this feature.

As for the rest of the new features and other improvements, you can read about them in the compiler release notes: 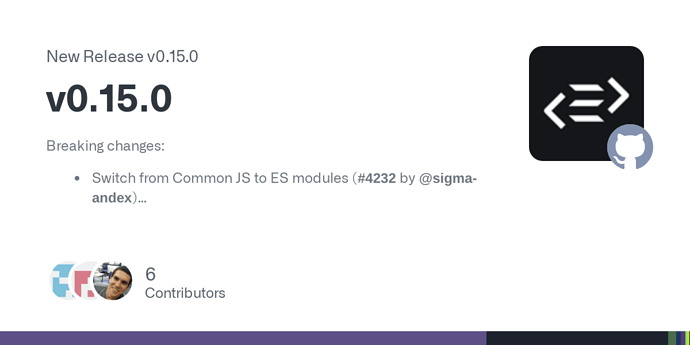 Breaking changes: Switch from Common JS to ES modules (#4232 by @sigma-andex) Previously, Purescript used Common JS for FFI declarations. Before, FFI was declared like this... const mymodule = re...

Due to the FFI migration and other breaking changes, most code that compiles with PureScript 0.14 does not compile on PureScript 0.15. Fortunately, the 0.15 migration guide refers to a script that can automatically migrate most CommonJS code to ES Modules. It also lists what changes one needs to make to get the code to compile again:

PureScript’s core infrastructure is compatible with PureScript 0.15. But a few resources won’t transition for a little while longer. These include:

If you would like to help out with updating these resources, please let us know.

If you are a Spago user, then you will automatically opt-in to the latest 0.15-compatible package set if you run spago init or spago upgrade-set and have the 0.15.0 compiler in your PATH. If you are a Bower user, then you can update your dependencies to their new major versions the usual way. (Use this jq script to update core, contrib, node, and web dependencies).

Adding your library to the package set

Many libraries have been dropped from the package set because they did not compile with the new compiler and core libraries. The vast majority of libraries that were dropped only need simple, largely mechanical updates to be compatible again.

If your library is one of them, please refer to the migration guide and the changelogs of your dependencies for help updating. Once your library is updated, you will need to make a pull request to the package sets repository.

We have commented out libraries from the 0.14.7 package set that were dropped from the 0.15.0 package set. This should help you make updates – simply uncomment your library, update the version number and/or dependencies, and submit a pull request.

If your library wasn’t dropped, you may still want to update it to take advantage of some of the new features.

Finally, consider cleaning up some of the warnings the compiler emits via purescript-psa:

Special thanks goes to all those who helped out with the ES modules compiler support, library migration, and documentation updates:

And shout-out to @PureFunctor, a newer contributor to the PureScript compiler, who’s been doing some great work!

Lastly, thank you @sid-yip for fixing the glibc issue. That has been a hindrance for quite some time.

Great work! Everyone that helped make this new version a reality, I want to say thank you for all your hard work!

I’d like to help update the book to v0.15 if you need help with that

I’d like to help update the book to v0.15 if you need help with that

Help would be appreciated! If you want to open up a PR, we can get that started.

Also, do you have any interest in maintaining that documentation work? Or just in getting it updated to 0.15.0?

I could be up for more. Let’s start small and see how it works out

Are there any benchmarks for a performance of the code? The articles mention a much smaller bundle sizes which result from cleaner generated code, so I’m curious how does that affect time performance.

Edit: Anyway, I’m on vacation now, but in a week I’m back and I’ll try to upgrade our production to v0.15. I’ll make some benchmarks on my own and let you know what I noticed.

I’ve seen some benchmark/performance-tests (halogen-hooks) and from there I’ve got more FPS but cache-size, etc. all was very similar.

Real World Halogen is now on Halogen 7 and PureScript 0.15 — this has got to be the most painless compiler / Halogen upgrade ever!

The update also brought the bundle size down about 100kb, and it’s nice to be able to drop the zephyr dependency and simplify the bundling process.

An in-depth beginner-oriented guide to learning PureScript from Foundations-up.

Changes from the last release are here:

So in my case, after upgrade from purs-v0.14.5 + webpack to purs-v0.15 + esbuild the js+css package size decreased from about 2MB to 1.6MB. Build time decreased from ~1.5 mins to 10-20 secs, rebuild times (--watch) also decreased significantly. I have also noticed a slight overall performance gain, but nothing quantifiable.

Overall, thank you very much for the update

Yes, I tried at first with some webpack plugin for ecmascript, and it worked, but my goal was switching to esbuild for speed entirely so I didn’t care much about it.

Is there any quickfix for packages.dhall to make the PureScript by Example book repo at least runnable with 0.15.0 ?

[error] Oh noes! It looks like the PureScript version installed on your system is not compatible with the package-set you’re using.

There are a few ways to solve this:

below let upstream = , doesn’t seem to work as described or I got the error wrong.

You’ll either have to use 0.14 with it (you can install it locally with npm for example) or you’ll have to spago upgrade-set and then deal with the errors you get (mostly moving common-js to ESM and for the book some changes because math got deprecated)

If I downgrade to 0.14, does spago need to be downgraded as well - or can it run with every purs compiler ?

you dont need to downgrade spago

Can this conversation (if it’s not done) be moved to its own thread? It’ll get better visibility that way if others encounter the same issue and are wondering how to fix it.