PureScript v0.15.2 has been released!

(Once again, we’ve skipped a version number due to release issues; if you downloaded a 0.15.1 release of the compiler, it should be identical to the current release except that it reports its own version number incorrectly. We’re still working out some kinks with our continuous prerelease automation!)

This is primarily a bug fixing release; some of you encountered some issues with 0.15.0 and we wanted to get a quick release out that addressed them before working on further improvements. But there are a number of long-standing issues resolved in this release as well, such as several related issues involving the intersection of derived instances and type synonyms.

Thanks to our other contributors for this release, @JordanMartinez, @fsoikin, and Nick Molloy!

Full release notes are linked below: 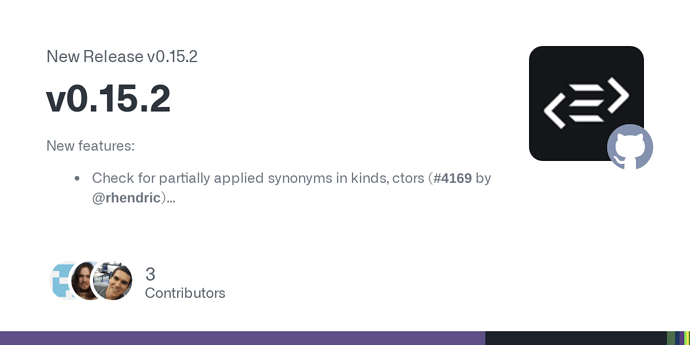 New features: Check for partially applied synonyms in kinds, ctors (#4169 by @rhendric) This check doesn't prevent any programs from compiling; it just makes sure that a more specific PartiallyAp...

There are some really big (internally at least) fixes in this! Y’all are on fire