Trying to modify a dice demo... then got stuck

I found this dice demo in purescript-cookbook, I want to make a little difference and see what would happen

Question 1: Why doesn’t it work as I thought?

No results on pursuit 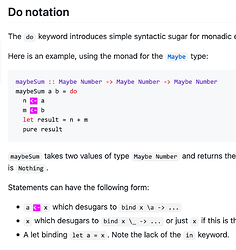 I tried to figure out what is bind , found this
https://pursuit.purescript.org/packages/purescript-prelude/4.1.1/docs/Control.Bind#v:bind 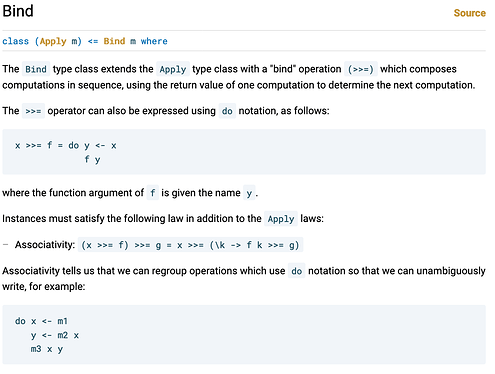 Still don’t know what’s the usage of <- , and what does it mean

Question 2: How to quickly figure out the usage of a symbol/keyword?

If you’re dealing with a regular function, Pursuit is the right place to look. In this case <- is not a regular function, it’s part of the language syntax. The language reference in the purescript/documentation repo is not a beginner resource; if this is your first time coming across <- I’d recommend the chapter of the PureScript book which covers the Effect monad: https://book.purescript.org/chapter8.html

Question 2: How to quickly figure out the usage of a symbol/keyword?

Thanks again for sharing the steps you took to figure this out on your own. This is valuable feedback on how folks can get stuck, despite doing a reasonable job consulting the available reference material (e.g. Pursuit and Docs repo).

Unfortunately, it seems like most of the resources expect you to read the book first, which can be a pretty significant initial time investment. We also don’t clearly state this as a prerequisite.

I think we should also enable the learn-from-examples approach by providing a better syntax reference. Perhaps we list symbols and keywords that are built into the language, along with links to where the reader can learn more.

I just pointed to the not-so-beginner-friendly language reference for a few of those links above. Ideally, we’d make this content accessible to beginners too by either:

Maybe this symbol and keyword lookup can be built into Pursuit.

Question 1: Why doesn’t it work as I thought?

This video delivers a really excellent overview of important language concepts in a beginner-friendly way (including “do notation”). Note that we use pure instead of return. 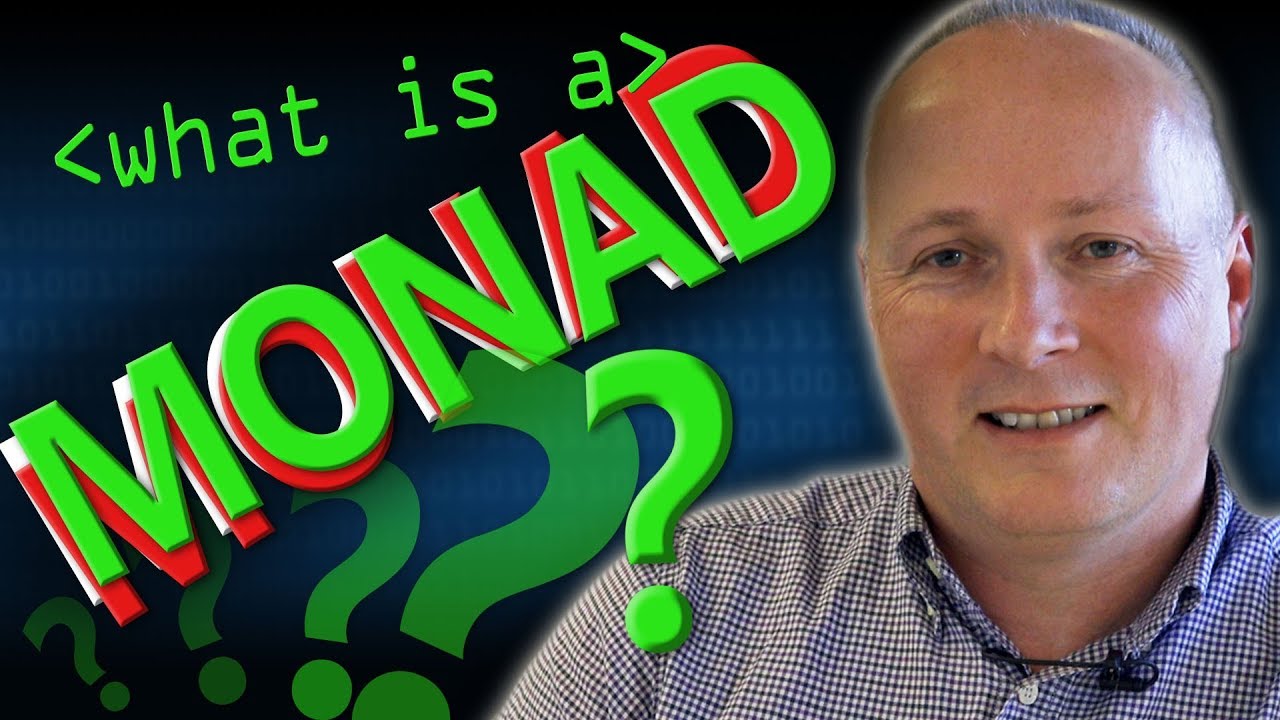 I think the term pure is another source of confusion for beginners. When I first saw that keyword, I assumed it was making the returned value “more pure”, when in-fact the value returned is “less pure” by getting wrapped in an effect. I think a better keyword would have been something like box, which conveys the act of packaging the value and is a common analogy in FP.

I’d recommend the chapter of the PureScript book which covers the Effect monad: https://book.purescript.org/chapter8.html

There’s also a section on “do notation” in chapter 4 of the book, but I (and others) found this pretty confusing on the first read though. Proposing we move this material on array comprehensions outside of the critical path for beginners.

I’m not sure I’d say it’s unfortunate that many resources expect you to have read the book; I think we should have resources that are aimed at intermediate or advanced users (in addition to resources which are suitable for beginners). Also, the book is just one path to becoming an intermediate user, but it’s definitely not the only one; if you’re coming from Haskell it’s probably mostly sufficient to just read through the Differences from Haskell page and maybe have a little trial and error to figure out how things work, and if you’re coming from Elm there are of course going to be some new concepts, such as type classes and higher kinded types, but you can probably still skip large chunks of the book.

I am happy to make the language reference more beginner-friendly to an extent, but only if that doesn’t get in the way of doing its primary job.

Maybe this symbol and keyword lookup can be built into Pursuit.

Also, for what it’s worth, pure is not a keyword, it’s an identifier (a function/value name); keywords are things like data or module which are part of the language syntax and not allowed as identifiers. I don’t think we can justify renaming pure at this point, although I tend to agree that it might not have been the best choice.

The thing about saying “monads are for effects” as that video does in the first few seconds is it can really throw you off as a beginner if you then look at, for example, list comprehensions or a do-block for a Maybe. For example, if you are in your first attempt to get extend main from log "🍝" to something else.

I really like your table there and the idea of adding to Pursuit.

A couple of simple diagrams, annotating a few uses for Monads (like Maybe, List, Effect) to spell out what do, <- and pure mean in each of those contexts would be very useful too. I will add an example here when i’m next at my iPad.

Actually, i think the meaning of let also needs to be spelt out in the do-block context (it’s hard to remember now, so great was my confusion when i first started)

The thing about saying “monads are for effects” as that video does in the first few seconds is it can really throw you off as a beginner if you then look at, for example, list comprehensions or a do-block for a Maybe.

A do-block for a Maybe is the core lesson of the video, so don’t think that will be confusing for beginners who watch it through.

I agree that these two terms can be confused though:

For context on Maybe as an “effect”, here’s a quote from the original book:

As an example, the functor Maybe represents the side effect of possibly-missing values.

I think we should have resources that are aimed at intermediate or advanced users (in addition to resources which are suitable for beginners).

To help beginners who may find themselves on a page intended for advanced users, we should still include links back to the basic resources for context. This could be as lightweight as embedded wiki-style links.

Since Haskell also uses pure, I think it’s best to keep it as-is too. But perhaps add a note in the function reference about how it may be easier to think of it with a different name, and the reason for using the current name. This is the only other discussion I could find on naming. I like the suggestion of thinking of it as fromPure. Some examples of usage with common types would also improve clarity.

Yes, that’s exactly it - it’s really not (to me) obvious coming from non-FP programming that taking something out of a list is somehow an “effect”. It hit me like a tonne of bricks when i read that bit in Stephen Diehl’s excellent “What i wish…” page after i’d been banging my head against the wall for quite a while (this was five years ago, there was a lot less quality learning material for both Haskell and PureScript then).

I’m just going to add on to the existing conversation about the available learning resources with my own attempt answering your initial question, @Ding:

If you consider the randomInt function’s type signature:

…which, when you apply the two Int's per your code randomInt 1 6, what you now have is something with just the type signature randomInt 1 6 :: Effect Int.

So when you use it within the where block, you are not actually generating the “result”. Rather, you are giving a new name to a function that, each time you call it, will execute its action again and generate a new random number between 1 and 6. I’m probably going to make this distinction between naming and executing a few times

So rather than result, this might be better named getNewResult or getNewInt:

Such that if you had the following main block of code, you should not see the same number logged three times (unless by bad luck!):

Creating this getNewInt function could also be written within the do block using a let binding:

In both the where and let cases, the use of the equals sign = can be thought of the same as “I’m giving the code randomInt 1 6 a new name that I can use in its place”, such that I could replace any of the subsequent getNewInt uses in the above block with randomInt 1 6 again and it would still mean the same thing. For example:

Each of the times that you see <-, you can think of that as "I am executing the action on the right of the <- and binding its result to the name on the left of the <-. So to compare the difference again…

You were close though! That is, you can achieve something like what you’re looking for by changing our getNewInt :: Effect Int function to a getNewString :: Effect String function.

That is, it will be an action that, each time it is run, it will generate a new Int between 1 and 6 and then turn that result into a String so that it can be logged to the console.

Without getting too into the details at this stage, what we need is a function that will turn our Effect Int into an Effect String. Or, more generally, an Effect a into any Effect b. This is where the map function comes into play. For our purposes, it will have the type signature:

You can read this as:

…or with a let block inside the do again as…

And remember, in those two above examples, our use of = means we are just giving the new name getNewString to the actions on the right. So in that last block of actions where we executed it 3 times…

…we could instead replace some of those calls with the definition again like we did earlier. That is, the below is the same as the above:

All three actions executed above are the same. The only difference here is whether we are using the underlying definition directly (such as in map show (randomInt 1 6) or whether we are using our own named functions that factor out part or all of that (like getNewInt and getNewString do). And, of course, if you dig down even further, you’d find that even randomInt is just a helpful name for another set of actions. And we could replace randomInt 1 6 with whatever longer code is its definition.

So considering your own code from the start:

…you were very close! All you needed was a map to have a valid action there:

Just remember. That’s just us giving a name to the action we might want to re-use, and not actually executing the action.
There’s also nothing that says we have to define these as local functions within a let or where block. We could make them top-level functions so that we can use getNewString all over our code-base in separate module files. For example:

Without getting into the relationship between Functor and map (…or <- and (>>=) with Monad), I’d say the takeaway out of all this is again the heuristic that:

Happy to answer any additional questions. Also happy to accept any corrections or feedback from anyone (…such as I’ve been imprecise/general/counterproductive in my attempt at being beginner friendly)

@and-pete
Thanks for your gorgeous explanation! I’m still confused about Effect , do , monad, type/variable namingspaces, and many other concepts, but I can understand your code! I can see the logic through it.

), I’m trying to read some Haskell tutorials to understand those “rune symbols” (e.g. >>= ) and start over to read the purescript book .