See the diagrams below 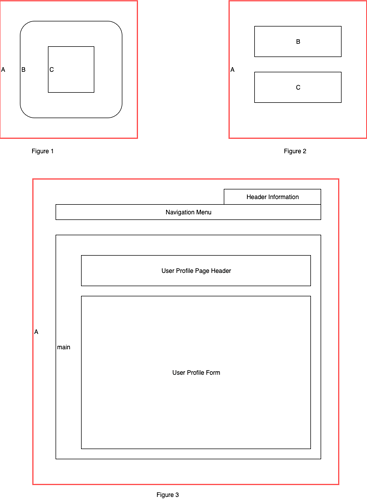 I think this would be a good issue to open in my learn-halogen repo. Would you mind opening an issue there?

The code below hasn’t been checked for compiler errors, but should give you a good enough idea for how to do it.

While Component A can technically talk to Component C by using either Query or Input, you probably want to use Query.

If using Input, A would update its state, which causes A to re-render itself, thereby passing an Input value into B. B would handle that value via its Receive action. B could then update its state, which rerenders C, which receives the new Input value via its Receive action. C then has to know that the input value is a special message from A and thus it should do something.
The downsides of this approach is that A and B’s state has to be updated and view has to be rerendered in order to communicate with C. If that fits your domain situation, then that will work. Otherwise, it’s probably not what you want.

If using Query, neither A nor B’s state needs to change. Rather, clicking on a button in A could trigger a command from A to C through B. Here’s how it would work.

Use Effect.Aff.Bus. That’s what Thomas uses in the Real World Halogen repo to update things throughout the page when the current user changes.

Below is my current guess. I’d imagine others have a better/fuller answer.

Thanks your comment @JordanMartinez !
For figure 1, I was thinking both unidirectional and bidirectional and my naive idea would be use B is bridge which I think is not ideal.

Those could be common use case and wondering how people solve them in real world.

looks like there are no samples on integrating with halogen.

But I generally do the simplest thing, which means just using queries and output messages.

This approach does result in some boilerplate, since you need to manually bubble messages / forward queries, but one positive aspect is it makes it very easy to follow the flow of things.

I don’t resort to Bus and the like unless there are many components that need to talk to a single one, or vice versa.

edit: depending on what is being communicated, inputs may also be suitable for some of the cases where I said “query” here. It depends where you want to manage the state changes. Also I only use inputs for “continuous” values and don’t attempt to “gate” or trigger things based on changes in an input.